On the Way to the United kingdom 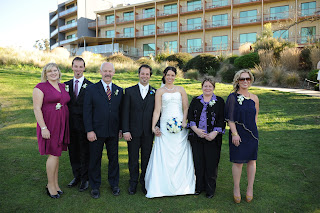 
It had been a very busy weekend leading up to this day. Ryan and Sarah were married on the Saturday culminating a week of visitors and preparation. We didn't leave the reception at the Novotel in Creswick until after 2 p.m. due to a lack of taxis to take us back to Ryan's house with his two Japanese guests. The next day saw a rush to the train station twice to see his friends off followed by an afternoon of packing for this trip. Visitors in the form of Alby and Eleanor, (the Gypsy Twitchers) filled in any spare time we might have had.


Emily dropped us off at the airport and drove back home. She had three assignments due before the wedding and another one in three days. Ryan and Sarah met us at the terminal and we had a quick lunch. They would be heading to Fiji at the end of the week for their honeymoon. A quick goodbye and we were soon working our way through customs.


The Qantas flight was 9 hours but by a quirk we managed to get upgraded to business class. It’s a long story but suffice to say we enjoyed the extra leg room and service that separates it from the cattle class. We arrived at 9.30 p.m. Hong Kong time and had to catch a taxi to the Royal View Hotel as we missed the shuttle bus. It wasn't too bad once we did the exchange rate which was one Australian dollar to eight Hong Kong dollars.


By the time we settled into our room it was after midnight, around 2 p.m. back in Australia. We slept well. 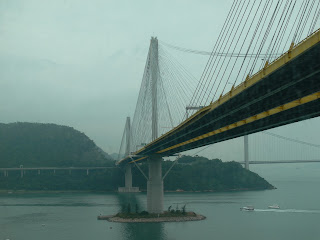 The view from our room
The view from our window was spectacular! We were on a cliff face by the bay with a large span bridge above us connecting to another island where a second bridge led off to the right. I can only marvel at the engineering feat that went into these and many other similar constructions.


I did a walk down the stairs nearby to the beach area and saw my first new birds for the trip; a Red whiskered Bulbul and a Magpie Robin.


We took the hotel shuttle bus to Tien Wan Station where we boarded a train to Mongkok. We’d been there before and enjoyed the market and today was pretty much as we remembered it. 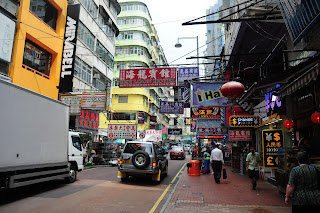 
I bought a pair of sunglasses while Glenda bought two pairs of shoes and some binoculars. We had lunch at a cheap Chinese restaurant and headed back to the hotel where I returned to the beach for some serious birding. 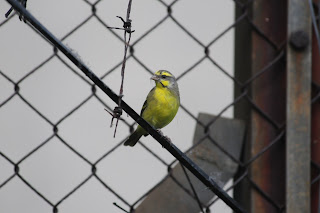 
I managed a Yellow-breasted Bunting which was intriguing as the bird tore at some binding on a fence gate presumably for nesting material. It wasn’t concerned by my presence at all and I managed to find a seat to use to stabilise my camera.


The breakfasts at the hotel were to die for with a range of options to suit all cultures staying there. We tended to mix all of them! Fresh salads, omelettes made to order, dim sims, baked beans, pork buns, pows, toast, fresh coffee and the list goes on. It was enough to sustain us all day and encourage some exercise in the form of stairs and long walks. 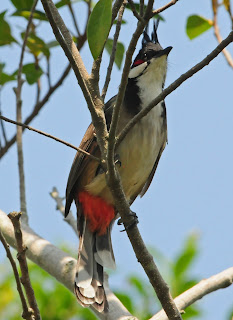 Red-whiskered Bulbul
Our journey took us into some countryside until the next copse of huge high rise apartments appeared. I would hate to live in such a building, indeed the crowds would get to me if we stayed too long in this city. Being spoilt in the wide open spaces of Australia is a blessing.


The sky was clear and hot in the open so by the time we reached the impressive entrance to the park I had to buy a hat while Glenda opted for an umbrella. The wetlands were excellent with a number of bird hides overlooking different environments which ranged from mangroves to creeks and lakes. While birds weren't prolific the ones we saw made up for it including close ups with Bulbuls and a waterhen species.


When we entered the first hide I realized l was out of my league as a number of boys with their 500+ lenses were set up. They were a noisy lot with mobile phones going off regularly despite the signs asking for quiet. Only a single Little Egret and a lone Intermediate Egret were there but it may have been the social gathering that attracted the photographers.


There were some good shots available at the park and l could have spent more time if available. The information centre was very modern and worth a look as well, almost like a modern hands on museum.


We did the long walk back to the station and the train change back to pick up the shuttle to the hotel. That night we dined at the hotel restaurant and were blown away by the offering. I’ll let Glenda describe it as it is her field. Suffice to say we were hurting by the time we finished.

Part of the harbour from under the bridge
Downloading photos was becoming a concern as we only had Glenda’s ipad. On past trips I’d always carried my laptop and worked on my photos at night but as we were travelling internationally and weight restrictions applied to luggage we decided to leave it behind. This was already becoming frustrating as the ipad, while compact and user friendly, lacked the sophistication and memory of the programs on my laptop. Besides, Glenda needed her computer time as well so it was the cause of some tension. 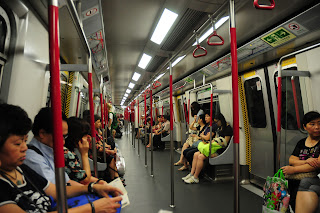 The Hong Kong trains were very efficient
After checking out of our motel and leaving our luggage in their secure area we again took the train to Monkok. I felt that an extra memory card for my camera would be useful as I might go well over the thousand plus photos it could handle. In the end I would take over 2000 photographs which would remain on my camera and its original memory card, the new purchase not being necessary.


We collected our luggage and took a taxi to the airport. The British airways flight wasn’t to leave until late and would be a 12 hour journey across China, Russia and parts of Europe. I thoroughly enjoyed the first section of the journey watching the vast area in the dark lit up by the cities and towns of China. Russia seemed more spread out in the darkness but my imagination of what was going on below us kept me awake for a good part of the journey.


As we approached London it was early morning and still dark. The lights of this huge city amazed me. I wasn’t expecting such a large sprawl of houses and buildings or the beauty that the golden night lights provided. This looked like the makings of an excellent adventure.

Posted by golivers travels at 7:18 PM